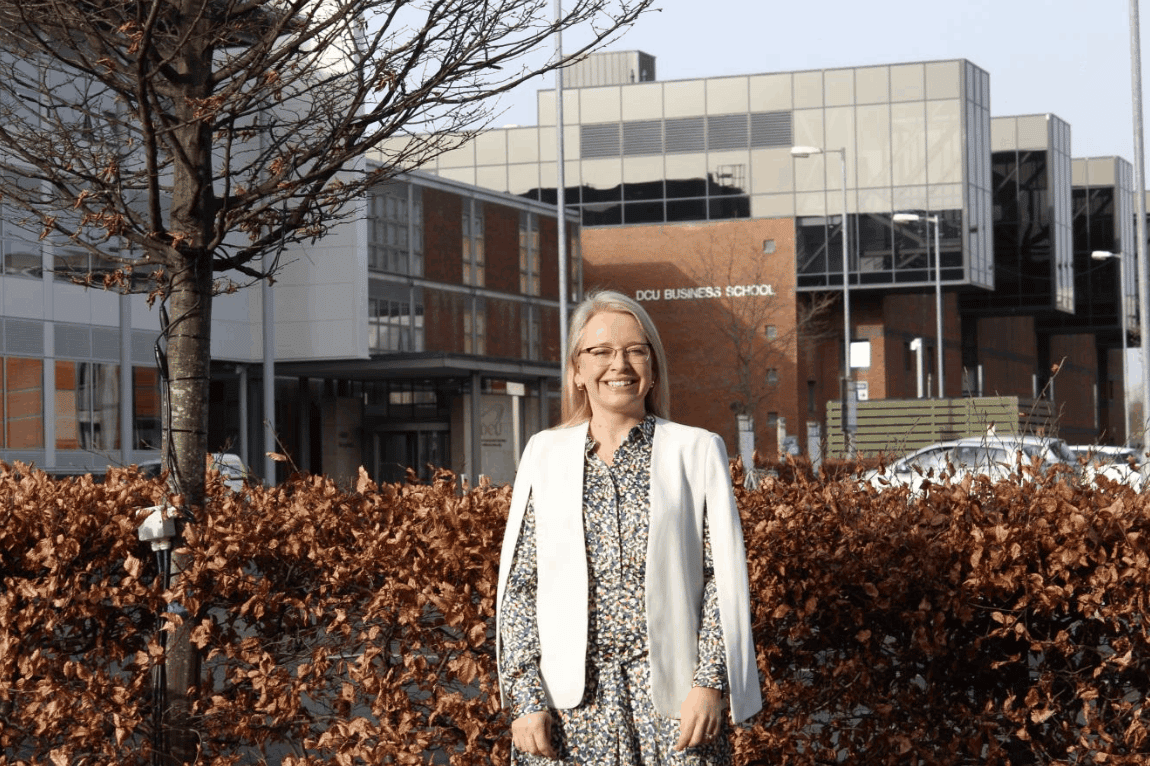 Meaningful innovation is at the core of what they do – but access to new medtech means overcoming structural and behavioural barriers. At Dublin City University, Bronwyn Brophy, Vice President of Early Technologies at Medtronic EMEA, discusses early stage medtech and the narratives that can help – or hinder – medtech innovation.

As part of the New Enterprise Development (NED) module led by professor Eric Clinton at DCU Business School, final year business students are given exposure to the theory and practice of entrepreneurship in Ireland – which often brings leading industry experts into the lecture hall. Professor Clinton is also the Director of the DCU National Centre for Family Business, and it was on the Centre’s invitation that Bronwyn attended and presented to the NED class.

Bronwyn Brophy has had an extensive career in the medical technology industry that has spanned over 20 years. She has been named one of the most powerful women in medtech by Silicon Republic, and was included among Ireland’s 25 Most Powerful Women by the Women’s Executive Network (WXN) for three years in a row. Also an alumnus of DCU, Bronwyn has maintained close ties with her alma mater and the community of educators and future innovators that pass through its doors.

Early stage medtech: from prototype to scalability to market

Medtronic developed the world’s first wearable, external battery-powered pace maker in 1957. Fast forward to 2016 and the revolutionary Medtronic Micra, the world’s smallest pace maker which can be implanted inside the heart. This is what Bronwyn means when she speaks about meaningful innovation. It’s the impact on the patient’s quality of life that drives innovation at Medtronic.

Opening her presentation to a lecture hall of NED students, Bronwyn describes how Medtronic fulfils its commitment to improving the lives and wellbeing of patients, and maintains its position as the world’s leading medical technology company. One avenue is through the acquisition of early stage medtech companies.

Bronwyn outlines the processes that they go through in identifying and acquiring potentially impactful medtech start-ups. It’s a thorough and lengthy process that applies a road map perspective to acquisition and development.

Lawyers are the first through the doors to check the status of the company’s IP and patents. The technology and the prototype is assessed, with the aim of achieving scalability in a cost effective way. Then comes the regulatory matters, and reimbursement – which is a significant obstacle in Ireland because while the cost of innovation is recognised as high, western tax payers simply cannot afford access to the latest medicine.

The realisable size of the market is an important factor, in which the aim for Medtronic is always rapid adoption among the small cohort of early adopters and innovators.

Furthermore, patient’s access to new medtech innovation is made even more complex by behavioural and structural barriers, and the narratives that surround them.

When Bronwyn interchanges the words ‘therapy’ and ‘technology’, she gives us a clearer idea of how Medtronic views its relationship to technological innovation; a patient centred approach. Medtech innovation has as much to do with people as it does with patents, prototypes and market research, and this human element can sometimes bring more challenges.

Companies with a new technology need to show evidence of its clinical benefits, and prove that it will improve the lives of patients. It’s the proven facts and the science that matter, and with clinical standards in the US and in Europe constantly rising, access to new medtech has become increasingly difficult to achieve.

Access is also dependent on the resources and capacity of hospitals, which often makes headlines for shortfalls in these areas. According to the 2018 Health Service Capacity Review published by the Department of Health, a sharp increase in capacity across all sectors of health and PODs is required to meet forecasted demand, and significant reforms to the healthcare system are needed.

One of the behavioural barriers that new medtech faces can be the attitudes and beliefs of those administering the therapy. There can be a “strong emotional attachment”, especially to long established medical devices and therapies says Bronwyn. In many ways, emotion plays a role in the medtech narrative, and its visibility within media space can reflect both the positive and negative aspects of this role.

In giving a platform to those who call for access to new therapies, mainstream media has the ability to challenge the industry and facilitate the opening of doors to new medtech innovations. After the CervicalCheck scandal was carried across newspapers and radio stations nationwide in 2018, attention was drawn to Vicky Whelan’s advocacy for the expensive – and not yet licensed in Ireland – cervical cancer treatment drug Pembro. Eventually, the decision was taken at a ministerial level to make this drug accessible to not just the 221 women affected by the scandal, but to all women with cervical cancer.

On the other hand, the media medtech narrative can play into a fruitless tug-of-war between what the tax payer wants access to, and what the tax payer can afford access to. It can also be a matter of therapies that have proven clinical benefits, and those that have not. The loved ones of those who are in need of therapy may go to great lengths to gain access to new treatments which are not yet clinically approved or financially accessible in their home country. Without a doubt, the emotional aspects of medical therapy play a significant role in the narratives that surround medtech innovation. What remains imperative is the need to focus on science.

Bronwyn came to DCU to speak about medtech start-ups and their acquisition. What we gained was an insight into the complexities of the medical technology landscape, and a reminder of the very human qualities that drive technological innovations in medicine.

We also use different external services like Google Webfonts, Pubble.io, Google Maps Google Analytics ( to help us understand how our website is being used) Cookies and external Video providers. Since these providers may collect personal data like your IP address we allow you to block them here. Please be aware that this might heavily reduce the functionality and appearance of our site. You can read about our cookies and privacy settings in detail on our Bronwyn Brophy helps inspire New Enterprise Development class Page