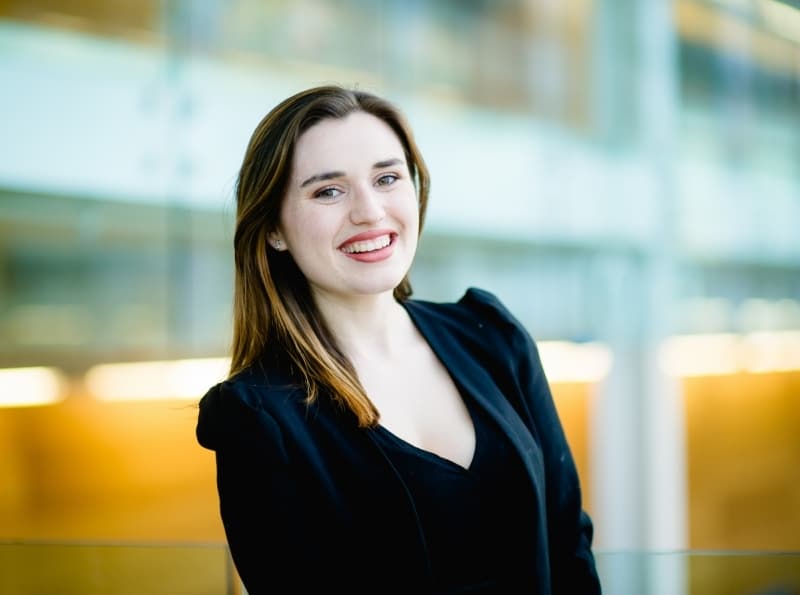 DCU Business School graduate Sorcha Killian has been awarded the prestigious Chancellor’s Medal in recognition of her academic achievement and engagement in student life during her undergraduate studies at DCU.

Sorcha has recently graduated from Global Business (Canada), where she spent two year studying at Brock University in St. Catherine’s, Canada.  During her first two years at DCU Sorcha took on the role of student ambassador, helping with promoting the Business School at various events and acting as a mentor to new students. Additionally, she adopted the role of Chair of the Mental Health Society at DCU and was an avid advocate for awareness of mental health issues among students.   During her two years studying at Brock University Sorcha again became highly involved in societies adopting the role of Executive Vice President of the Business Students Association. Her work here included the founding of the Women in Business society. This ultimately led to her gaining national acclaim – resulting in her being awarded ‘All Star Executive of the Year’ by the Canadian Association of Business Schools.

Sorcha spoke to us about life after university and what she is doing now, just a few months after finishing her degree:

Since graduating from DCU and Brock I spent some time traveling with friends I had picked up from both universities! I then started working in June with Websummit as part of their Startups Team. As part of Websummit, I have been given the opportunity to travel with work and speak to people from every corner of the world. This passion for multicultural working is something that was instilled in me through my time at Global Business.

Having always been a planner, I surprised myself when I wasn’t entirely sure what I wanted to focus on after the fourth year. In a world where we are incredibly specialised I wanted to do it all. That’s why I decided to work with Startups. Throughout my time in DCU and Brock I completed three internships and about 7 part-time jobs. I’ve worked in multinational accounting firms and a 4 person digital marketing agency. I realized I needed to work with people who love what they do and that I wanted to have a hand in everything from finance to design. That’s why working with startups is so fulfilling, especially when matched with the steady paycheck of an internationally recognized company like Websummit.

Through my job I get to talk to the most interesting companies coming through Websummit. I’ve had new passions ignited in areas such as MedTech and CleanTech which are areas I had never even considered before and now am deeply invested in. I’ve also becomingly increasingly interested in the Venture Capital landscape. Working with startups, I started seeing patterns into why certain companies were or weren’t being invested in. While at DCU I was president of the Mental Health Society and while at Brock I was the Founder of Brock Women In Business. I’ve always been passionate about highlighting under-represented areas and have become increasingly interested in doing this through Venture Capital funding.

As part of this, I have been accepted as one of 30 fellows to take part in the Included VC fellowship which aims to promote diversity in Venture Capital funding of startups. Throughout the fellowship, I hope to move into working in VC and trying to make a difference in the startup landscape. I also get to travel through this fellowship and in November alone will be going to Lisbon, Toronto, London, and Berlin between Websummit and The Fellowship! So definitely taking the Global part of Global Business seriously!

I’m incredibly lucky to have received so many amazing career opportunities but to be honest graduating was quite a scary time. I had no real idea of what I wanted to do or where I wanted to go. Moving from university into “The Real World” wasn’t easy and while I definitely miss my 10am starts, it’s fun to finally put to the test everything I learned over four years.

We also use different external services like Google Webfonts, Pubble.io, Google Maps Google Analytics ( to help us understand how our website is being used) Cookies and external Video providers. Since these providers may collect personal data like your IP address we allow you to block them here. Please be aware that this might heavily reduce the functionality and appearance of our site. You can read about our cookies and privacy settings in detail on our Global Business Canada – Sorcha Killian’s Graduate Story Page