Luke Keaney, Managing Director of GID Europe and former Donegal footballer, spoke to final year students in DCU Business School this week on the topic of coping with adversity. 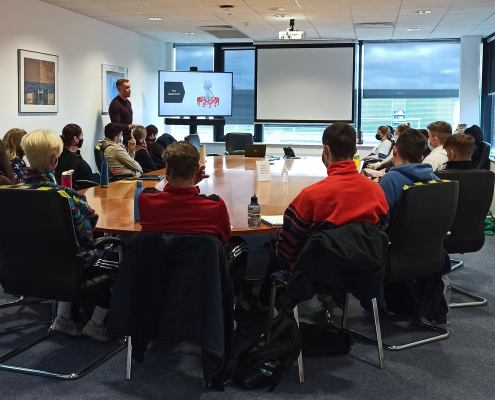 Final year students studying the New Business Planning module, a partnership between DCU Business School and the School of Health & Human Performance, had an extremely insightful and engaging session with Luke as he shared his story of remarkable resilience in overcoming numerous hip surgeries which ended his football career and his plans for his future as they were.

Next year he has been asked to tell his story at FIFA’s Isokinetic conference, which will also feature the likes of Steven Gerrard and Marco van Basten, alongside a host of medical experts.

“It just shows, no matter what life throws at you, no matter what hurdles you have to overcome, you can carve out your own path. All those dark days, the suffering… I’m not saying I’m over all that, but now I’m at the top of rowing, despite all those setbacks.

It’s been a long road, but I’m extremely proud of that.”

Keynote Address to Students on Startup Funding and Pitching to Investors in...
Scroll to top

We also use different external services like Google Webfonts, Pubble.io, Google Maps Google Analytics ( to help us understand how our website is being used) Cookies and external Video providers. Since these providers may collect personal data like your IP address we allow you to block them here. Please be aware that this might heavily reduce the functionality and appearance of our site. You can read about our cookies and privacy settings in detail on our Former Donegal footballer Luke Keaney speaks to final year students in DCU Business School Page