Back to Home > News and Events > Griolladh 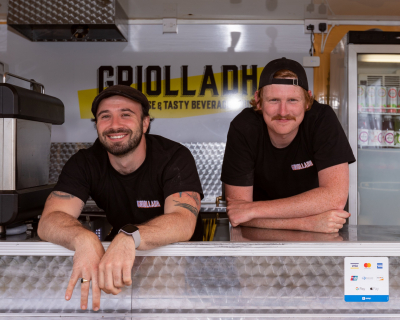 Griolladh began in June 2020, in the height of the pandemic. Myself and my business partner (Jack Brennan) had both been temporarily furloughed. We had no idea when normality would resume, so we decided to find a temporary project to fill up our time. Within two weeks we had rented a trailer, created a brand and found a location. We were lucky to befriend some wonderful people who allowed us to pitch in their front garden, along the coast in Malahide, to sell toasted sandwiches, pastries and coffee. We cooked our first sandwich the morning of opening. Within the first weekend we had queues which lasted 45 minutes. We thought it would die down but it didn’t! We couldn’t believe the feedback and the buzz. We knew then that we had something special and decided to give it our all.

We developed more recipes, created specials, popped up at over 11 locations from Bray, Dundrum, Carrickmines, Drumcondra, and multiple city centre locations. We rented a kitchen, hired chefs and decided to cook all ingredients from scratch. We continued to do pop ups and collaborate with various brands, whilst mapping out our future.

In 2021 we went on the hunt for our first fixed premise. Restrictions came and went. ‘Normality’ had still not resumed. Eventually we found a location that ticked a lot of boxes on Thomas St D8. An old butcher shop, it had the space for a production kitchen at the back and a shop at the front. We began fitout in late August 2021, and eventually opened January 2022, with little fanfare as restrictions prohibited us from celebrating the opening of our first fixed home.

The plan was to expand further immediately. We wanted rapid growth but unfortunately the world wasn’t with us. A few new locations fell through. We decided to do a quick pivot into the events world – Duran Duran to Dermot Kennedy, Guns and Roses to the Fleadh, the Ploughing Championships to the Amazon summer party. It was an incredible amount of work but it allowed us to keep trucking (pun intended), reach a whole host of new customers and add another revenue stream for the business in the future.

Recently we have opened our second bricks and mortar store in Arnotts. After a couple of months of pitches and taste tests we got the go ahead. They set us the task of having the fit out ready in a week as we headed into silly season. We turned it around and were open the following Monday with crowds that reminded us of the first few weeks in the front garden in Malahide. 2023 will see us open two more fixed locations in Dublin.

Over the last couple years there have been macro elements that have caused us to consistently pause, rethink, pivot and cry. What I have learned is that there is no ‘normality’, so make the best use of the situation in front of you, and find the opportunity in every setback.