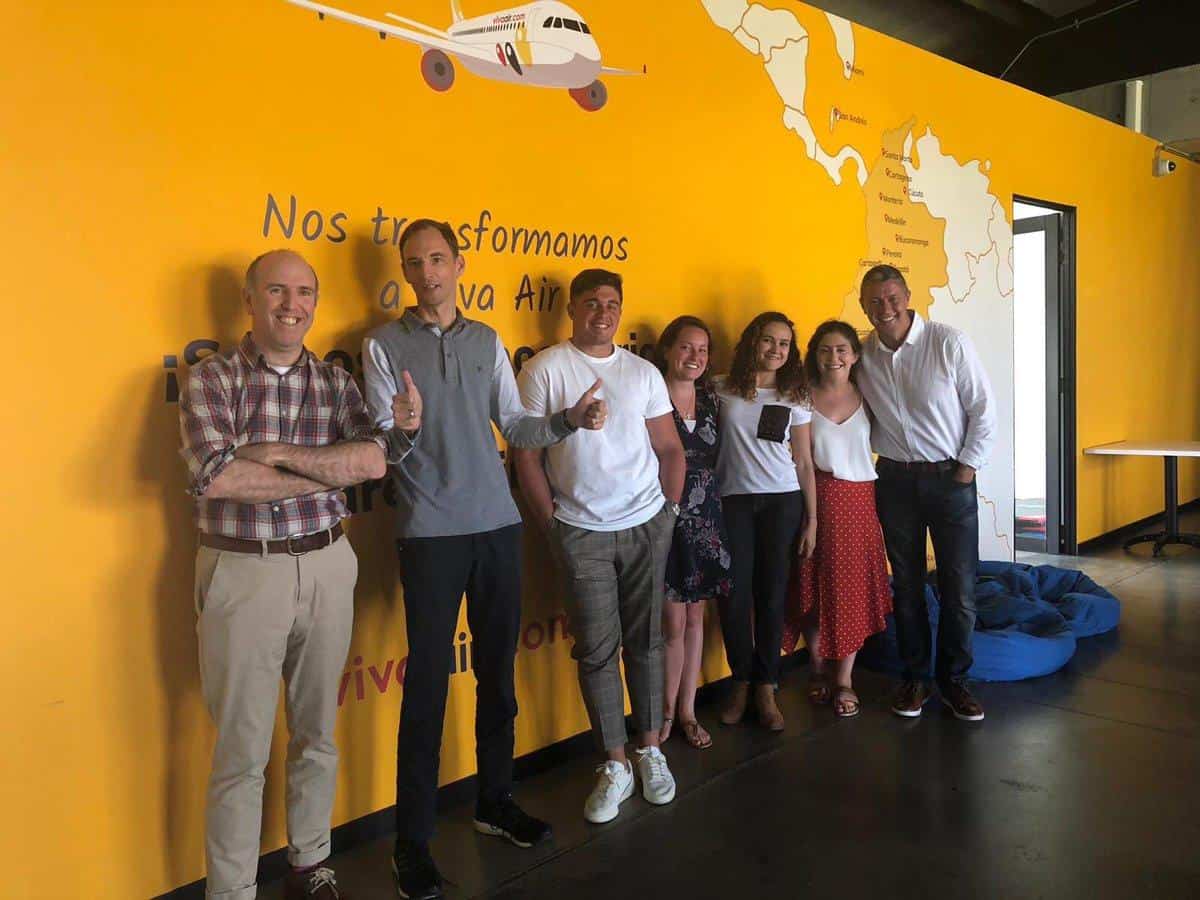 Earlier in October, a lucky group of DCU Business School MSc in Digital Marketing (MSDM) students travelled to Colombia to work alongside their practicum project client VivaAir. Cillian Walsh, John Grennan, Samantha Mulvey and Silvia Jones-Melendo spent a week in the heart of Latin America with Prof. Theo Lynn as they worked alongside their new client on project plans for the year ahead and soaked up the culture of Colombia. VivaAir are a low-cost airline carrier that service 20 destinations across Colombia, Peru and United States, with their new Miami – Medellín route offering another gateway between North and South America.

DCU’s MSDM group will be putting their digital marketing knowledge to work over the next 12 months to further aid VivaAir’s growth as an airline in the Latin American market. The students have recounted their experiences of working with VivaAir and their time spent in Colombia below.

Dublin to New York, to Miami and on to Rionegro – it was quite the journey to Colombia but the excitement of getting there made the trip fly by, literally. The morning after we arrived in Rionegro, we were flown with VivaAir to Santa Marta. This was our first opportunity to fly with VivaAir and experience our client’s services. We were pleasantly surprised at the efficient check in and security check, followed by a smooth take off. It was a short trip to Santa Marta, just over half an hour which meant we still had the whole day to explore the town when we arrived. We flew back to Medellín the next evening and were delighted to have an equally pleasing experience with VivaAir on a comfortable flight back to Colombia’s second most populous city.

Santa Marta, situated on the west coast of Colombia off the Carribean Sea, was the first stop on our trip. It has a population of just under 500,000 and is South America’s oldest European-founded town, founded officially by Spanish explorers in 1525. After our short flight from Rionegro, we arrived into 30 degree heat and full of excitement. Our hotel, Hotel Santiago de Arma, was situated right on the beach front and, to our surprise at 7am, it seemed like the whole of Santa Marta was on the beach. From our rooms we had a great view of both the mountains and the beach – allowing us to take in the best views of Santa Marta.

For our first day we went for a wander around the lively beach area of Rodadero and down to the local restaurants to get a sense of where everything was, followed then by a quick shopping trip as we had no spare clothes (thanks to American Airlines)! We then explored further to the Centro Historico de Santa Marta, which is where you will find local landmarks, beautiful buildings, vibrant street art and some of the most interesting restaurants. In the evening, we took a walk down by the marina to watch the sunset and, to our delight, it was the most beautiful sunset we could have hoped for.

On our second day, we travelled by boat to Playa Blanca, a secluded beach with water sports, zipline, quaint bars and restaurants. Unfortunately as our bags went missing, so did our sun cream and we came to the conclusion that our Irish skin could cope with the sun. It’s safe to say we glowed for the remainder of the trip, and peeled like snakes. Always wear sunscreen!

The cultural element of Santa Marta was everywhere to be seen, whether it was along the beach where music was playing and dancing with friends and family was the norm, or in the Centro Historico. It was beautiful to see and we were all very fortunate to have had the chance to visit such a traditional part of the continent.

Medellín City (2,500 ft above sea-level) is located within a crater enclosed by mountains, while VivaAir’s offices are based in Rionegro (7500 ft above sea-level) next to the José María Córdova International Airport. Which meant to travel in and out of the city to the offices each day, we were driven up and over the surrounding mountains. At such a high altitude our ears would pop while often feeling the full effects of altitude sickness! We worked alongside the VivaAir marketing team over the course of three days, who gave us further insight to the business and helped us build a strong project plan for the year ahead. Destination marketing was the focus of these planning sessions, with a fresh new content marketing strategy needed for VivaAir to promote their multiple routes across the continent and, most importantly, to Miami. As a group, we’ll be working hard to push as much digital success across each channel available to VivaAir in the next year.

For the bulk of our visit we stayed in Medellín City at the beautiful Diez Hotel. Medellín is not what you would expect. 25 years ago, Time Magazine labelled it the most dangerous city on earth as showcased in the TV show Narcos. Maybe it deserved the label then, but certainly not now. Medellín has become vibrant and modern city that’s set in a valley surrounded by mountains and nicknamed the “City of Eternal Spring”. The hotel was located in the commercial centre of the city and had an abundance of high-quality restaurants right on our doorstep, with the spectacular food being one of the many highlights of the trip. On the last day however, we had an opportunity to explore the city and take in the sights, the sounds and the culture. A highlight of our excursion was a trip on the metrocable, a gondola lift system that has become one of Medellín’s biggest tourist attractions owing to the fantastic views it affords. The system wasn’t designed as a tourist attraction but a means of allowing integration between the city centre and the settlements in the steep hills.

Medellín as a city is beautiful, and the food was outstanding, but the highlight of Medellín and maybe Colombia as a whole, was its people. The Colombian people are warm and welcoming and make you feel right at home in their beautiful country.  We certainly hope this won’t be our last experience in this magical part of the world.

Travelling overseas and working on a Practicum project with a well-recognised brand like VivaAir is just one of the benefits of studying the MSc in Digital Marketing at DCU Business School. Interested in finding out more? Get in touch with our programmes team today.

We also use different external services like Google Webfonts, Pubble.io, Google Maps Google Analytics ( to help us understand how our website is being used) Cookies and external Video providers. Since these providers may collect personal data like your IP address we allow you to block them here. Please be aware that this might heavily reduce the functionality and appearance of our site. You can read about our cookies and privacy settings in detail on our MSc Students Take Digital Marketing Skills to Colombia Page